West Coast Trail
12 x 16
oil on canvas
Odd sounds drive me crazy and fortunately I chased down the latest one and discovered a failing hot water tank which led to the discovery of a failing water pressure valve leading into the house, a disaster in the making! Fortunately for good friends become neighbors, and the other way around of course and a great plumber all is well now. But whilst the work was being done I had my dogs tied to my chair and sat for several hours painting this west coast scene. This trail follows 75 kilometer of the west coast of Vancouver Island and it took us 7 days to hike it. On day 2 of the hike we climbed down the steep cliffs to the tidal flats which were much easier to hike along than the forest above, but had to be timed perfectly with the tides or one could get caught with no way back up as there were only a couple of spots where ropes had been left dangling down. It was many years ago that I was on this trail back when there were few others out there. Now one has to reserve a spot in order to access the park so that the numbers can be kept down. 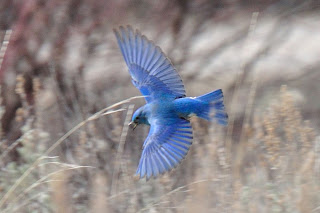 Another highlight of the week happened during a hike out to a favourite nature reserve. I was climbing a hillside with my camera looking for meadowlarks and all of a sudden was surrounded by dozens of bluebirds swooping around and landing next to me. There were mostly Western Bluebirds but a few Mountain Bluebirds appeared in my photographs. I met a wonderful couple from a nearby town on the way down the hill and as we were standing there talking the bluebirds showed themselves again. The whole experience was magical!
Posted by Unknown at 8:33 AM

thanks, Barb for the stunning work - painting and photo. The gifts of the gifted. Hope to see you on the trail again some time.

I never realized that bluebirds were so very blue!!! I love the patterns and rhythms in your oil painting, Barb!

Thanks so much Danial - I've been back to the same place since but without the great experience of meeting like minded souls and the birds had gone to ground. I guess a little karma and of course luck with the timing!

Thanks Marie, I didn't realize they were so blue either as they move so fast one only gets a flash of blue. Of course this birding is new to me and I've never really taken the time to look before.

We're from Indiana and occasionally enjoy the rare treat of a visit from little bluebirds. I wonder if they are different from yours. Our are little chubbies with red breasts and wear an expression as if they are in a perpetual bad mood. I just love them. And I love your paintings!

Hi Terri - yours sound like Western Bluebirds - we get them here as well and they are beautiful! I'm glad you love my paintings. Thanks for coming by.