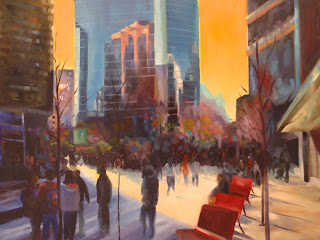 Long after the Olympics are over I am still suffering withdrawal, cold and fatigue forgotten, regrets on not spending more time downtown, wishing it was an annual event here and yes I would do it all over again. I know I said I wouldn't but I have said that about Ironman too and here I am signed up to do it again in August. So with two weeks away from the easel I could feel a painting coming on and it was going to be a big one. Another Vancouver scene. The last two days spent painting and I thought it was done but as is often the case as soon as I get it on the computer I can see all kinds of touch ups needed. The challenge in this one besides the people and reflections was the varying nature of Vancouver's downtown buildings with rounded sides and odd shapes and positions. I tried to worry not so much about perspective but more about getting some interesting patterns with the hope that in the end it reads okay.
Posted by Unknown at 10:51 AM

What a very excellent painting. I really had to convince myself that it was painted. Busy and tranquil at the same time. I am glad that the Olympics provided such inspiration! And all the best with that physical challenge!

Thank you Marie,
It was funny downtown during the Olympics in that the crowds were sometimes overwhelming but the feeling of calmness and happiness from everyone kept the mood tranquil. I often went downtown early just to relax amongst the crowds. I'm glad that impression came through in my painting.

Nice treatment of the light in the painting, Barb.

Thanks Drew - I try to push the light for drama and it is often hard once you find a great composition to get the light right - time of day is so important and in this case I got lucky.