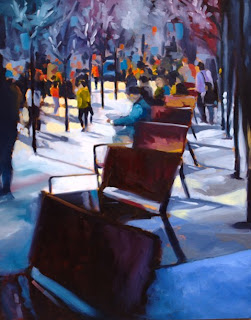 I have lived in Vancouver most of my life and have never seen anything like the last three weeks of Olympic partying. I commuted most days downtown to my volunteer job at BC Place where the opening, closing and medal ceremonies were held and before long was starting to go early and stay late just to experience the amazing energy of the friendly crowds and the crazy fun entertainment. My volunteer experience itself was brutal and one of the hardest things I've had to do in my life. The first ten hour day started with an unexpected all day posting outside in inadequate clothing and I was left feeling dismayed and humiliated when I found out I was not allowed into the very venue at which I was working. I was given a half cup of chili and that was it for food for the entire ten hour shift. By the time I arrived home I'd been standing on cold concrete in winter weather for twelve hours, couldn't get warm and it took several hours to fall into a fitful sleep. Most of my shifts were like this so I began to pack extra clothes and my own food and I had to sleep and rest on most my time off. I was yelled at on a daily basis, an easy mark in my 'blue jacket' for those frustrated with the Olympics and the inconveniences they were experiencing or for those who found the venues difficult to get around. I was often posted as an Access Control or at the security checks where I had to deal with angry work force, arrogant media or impatient ticket holders. I suffered from the rain and cold all the while working alongside paid security people who were given winter clothes and shelter under a heated tent. One night the security team kept bringing me in under the heater as they could see I was turning blue. I got sick of course, lost six pounds and am still trying to recover. Were there any good moments, something that made it all worthwhile? Well I wouldn't go that far but I did get to see the opening and closing ceremonies, met my favorite singer Sarah McLachlan, made some good friends and had some pretty funny moments that still make me laugh. Would I do it all again? Not a chance. I am so happy to be home and painting again!
Posted by Unknown at 5:41 PM

If this had occurred while you were serving our country, I'd nominate for the Purple Heart!

What an ordeal. I hate being cold. This is an awesome painting belying your challenging , "not paid enough to take this----" job.

Thank you for sharing with us directly from the Olympics, Barb! I read this out aloud to my husband, because it made us all feel part of it.....You mostly did thankless work and bore it out to the very end. That was brave! Now please get better and remember only those amazing highlights! I love your painting and the use of purples, it is very atmospheric!

This is a really striking painting. Could not wait to get to your blog to look at it. It is too bad that your volunteer experience was not a great one - 10 hours is a bit of a long shift to make a volunteer work. At least you got to meet Sarah McLachlan - love her!
Happy painting!

barb,
very good painting with nice composition...
i liked your blog...
the boats are also fantastic...

This is a wonderful painting, Barb, and thank you for sharing your experiences. We watched from our comfortable living room and never thought about what you may be experiencing (although we did keep saying "How do they all seem so comfortable in the cold?"). Dealing with the public is always an eye opener, but I would have hoped Olympic volunteers would have been treated better than that. Again, thanks for sharing!

Thank you all for your kind comments. As often happens struggles and hardships become fond memories maybe because of the pride of rising to the challenge. I of course went back for more punishment! My next post will be about the Paralympics...

Holy Cow, Barb!! That sounds positively brutal. Much harder than what the athletes had to endure in a 3 minute event. good lord. You do deserve some medal.
Beautiful painting. Glad you're back painting, too. I'm cold and tired just thinking about it.
(But meeting Sarah McLaughlin is so cool! love her!)

Nice painting! The repeating benches are very eyecatching and the blue shadows of the snow very convincing.

Wonderful composition and lighting! Sorry to hear that you were treated so badly as a volunteer. Hope it was not too bad an experience.

Thanks Liz, r and Lori - now that I am fully recovered I am going thru Olympic withdrawal - go figure! I've actually looked into volunteering at London 2012 and Sochi 2014 but won't likely. It is nice to have some pretty good insite into the whole affair though.

Barb, your Olympic paintings are fascinating. We watched this event on the east coast in front of a TV. How neat that you chose to get close by volunteering. Not only have I enjoyed your paintings but your writing about it is very interesting. Would love to read more of your experiences and see more of your paintings of the real thing. What you painted and wrote about is NOT shown on TV so you are giving an interesting perspective of the down to earth nitty gritty. After watching this event, it is hard to even imagine how all was coordinated to create and make happen. Ruth

Thanks Ruth - yes there was much that didn't get to the press as everyone wanted to focus on getting the job done. I think people are still reeling from the enormity of the event and I am certainly not over it yet. Am heading to Vancouver soon to paint some more scenes!